The article is devoted to the analysis of the names of food and drink in the Ladder of John Climacus. The material for analysis is the published text of the work (Patrologia Graeca, vol. LXXXVIII) and three unpublished ancient Greek manuscripts of the Ladder. In total, 21 words were found in the work, included in the lexical-semantic group “Food”, and 6 words included in the lexical-semantic group “Drink”. In many cases, lexemes are used in pairs (salt and oil, milk and honey, bread and water, bread and mustard). This use is obviously due to the biblical tradition, on the basis of which the author of the Ladder built his book. For the general designation of food, nouns such as βρῶμα, τροφή, τρυφή, βρῶσις, ἔδεσμα, ἑστίασις, ὄψον, τράπεζα, ἐδώδιμον are used. In a collective sense, the lexemes καρπός and ὀπώρα are used to designate fruits. For the names of vegetables (herbs) in the Ladder, lexemes such as πικρίς and λάχανον are used. Of the specific types of food in the Ladder, there are names of baked goods (ἄρτος ‘bread’ and ἄζυμον ‘unleavened bread’), grapes (βότρυς and ῥάγας), spices (ἔλαιον ‘olive oil’ and ἅλας ‘salt’), honey (μέλι) and cheese (τυρός). To designate drink, in general, in the Ladder there are the lexemes πόμα, νάμα and ποτόν. Specific drinks are called ὕδωρ ‘water’, οἶνος ‘wine’ and γάλα ‘milk’. In the lexical-semantic groups “Food” and “Drink” hyperonyms clearly prevail over hyponyms. The small amount of specific vocabulary is explained by the fact that for a monk, as he moves up the ladder of virtues, it is less and less important what food he consumes. Monks who have reached the highest degrees of spiritual life (ἰσάγγελοι, equal to the angels) no longer feel the taste of food and forget to take it; for them the most important thing is spiritual food. In the lexico-semantic groups “Food” and “Drink” in the Ladder, as in the texts of the Holy Scriptures, direct (physical) and figurative (spiritual) meanings are masterfully connected. Almost all examples of the use of these words can be viewed both in the direct and in the symbolic sense. In the highest metaphorical meaning, all lexemes included in the thematic field “Nutrition” represent a symbol of participation in God’s salvation in Christ. 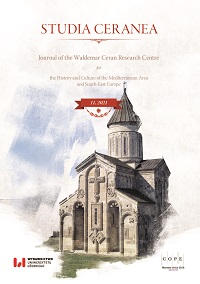 Publication of the English version of the yearly “Studia Ceranea. Journal of the Waldemar Ceran Research Centre for the History and Culture of the Mediterranean Area and South-East Europe” – financed under Agreement No. 605/P-DUN/2019 12.06.2019 with funds provided by the Ministry of Science and Higher Education for activities popularising science 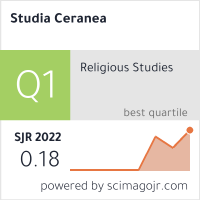 Most read in 90 days