Carl Jung paid a short visit to Taos, New Mexico, in January 1925. A brief account of his stay at the Pueblo appeared in Memories, Dreams, Reflections, edited by Aniela Jaffe in 1963. Remembering his conversations with Mountain Lake (Antonio Mirabal), Jung wrote of the confrontation between the “European consciousness,” or the “European thought,” with the Indian “unconscious.” My article provides a reading of Jung’s text as a meeting ground of the aesthetic, emotional, visionary and of the analytical, rational, explanatory. Like many other European and Anglo-American visitors to Taos Pueblo, Jung rediscovers its capacity to mirror the inner needs of the visitor; he examines the significance of the encounter with the Southwestern landscape and with the Pueblo Indians’ religious views in terms of self-reflection and of the return to the mythical. As Carl Jung’s “inner comprehension” of the Pueblo Indian’s philosophy is mediated through language, aware both of its desire and its inability to become liberated from the European perspectives, Mountain Lake’s attitude towards his visitor from Switzerland remains ultimately unknown; Mountain Lake does, however, communicate his readiness to assume the archetypal role of a teacher and a spiritual guide whose insights reach beyond the confines and mystifications of language. According to Jung’s account, during this brief encounter of the two cultures, he and his Indian host experienced a sense of satisfaction and fulfillment, the sources of which, as they both understood them in their own individual ways, resided in the comprehension of universal sharing.

Zbigniew Maszewski defended his doctoral dissertation, which dealt with self-reflexive motif in the works of American Romantic authors: Poe, Melville, and Hawthorne, in 1991. Since then he has been teaching in the Department of American Literature at the University of Łódź. In 1994–95 he held the American Council of Learned Societies Fellowship with affiliation at Harvard University. In 2003 he published William Faulkner and Bruno Schulz: A Comparative Study. His special areas of interest are American Romanticism and American and European literatures of the 1920s and 1930s. He has recently published on the American Southwest (an article dealing with the motif of the desert in Willa Cather’s Death Comes for the Archbishop, which appeared in Visuality and Vision in American Literature, a volume which Maszewski edited), as well as on Ernest Hemingway’s letters and his novel Under Kilimanjaro. Both “Under Kilimanjaro: Homesickness for the Wild and Hemingway’s African Dressing Gown” and “‘It Is Beautiful Country Jim’: The Art of Hemingway’s Letters” came out in 2014 in Polish Journal for American Studies. 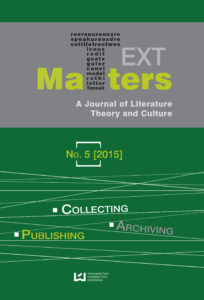